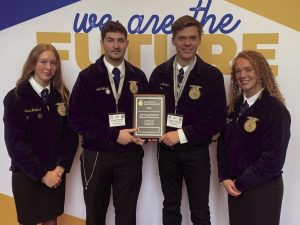 The Grand Rapids FFA chapter had two teams place top-5 in events at the 94th National FFA Convention and Expo held in Indianapolis on Oct. 27-30.

Both Grand Rapids teams represented the state of Minnesota at the event.

environmental and natural resources. These areas concentrate on soil profiles, water quality, waste management, and the use of global positioning units.

The Durant (Florida) FFA team placed first in the event.

In the Forestry Career Development Event, Minnesota took home fifth place with a presentation on how to prevent and combat invasive species. Minnesota’s team consisted of Eric Gunderson, Jacob Anderson, Andrew Linder, and Brock Pavelich of the Grand Rapids FFA.

“The adversity that these teams had to endure over the past year and half has been nothing short of amazing,” Grand Rapids FFA Advisor Shawn Linder said. “They understand what hard work means and this competition gets them prepared for the outside world when they graduate.”

Linder said it was also a challenge for many teams to bring a full roster to the competitions due to illnesses and COVID restrictions.